Why Does Hercules Always Look Like He Got Dressed In A Hurry?

One thing being another and what they are, I decided to repost  this old thing from 10 years ago under the title above. When I started this blog I hoped things would get better in the Middle East --on general principle and personal experience. 52 years ago I lived with 3 other guys at Palomar Apartments. We lived across the pool from 4 Lebanese students. We'd get together and play a kind of water polo with a volley ball. They were just as goofy as we were --the same except they had holes in them, stitched and healed over. We learned they had been made to operate machine guns at age 12 or so. They also said, "America, don't send troops into Middle East; you never get out!" 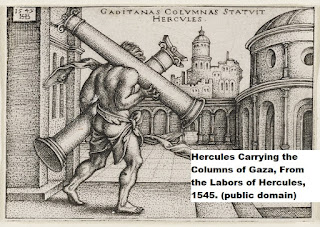 So, let us time travel:

Last January, Israel's Welfare Minister, Isaac Herzog, said his country aimed to prevent an "over-dramatization" of facts by fanning out its diplomatic corps to all corners of the globe to explain why it needed to bomb the Gaza Strip into a different grade of gravel. It was heralded as a battle for public opinion. I doubted it would go well. "Over-dramatization" is hard to avoid in all situations that cannot be exaggerated.

I thought, world will listen to spin and reject it, because people are choosing a more enlightened path for themselves. People are miserable with spin. Matthew Arnold wrote, "He who finds himself loses his misery" , which is a start. Quote only isolates end result of a long process that begins with facing the truth about one's self and can be very miserable indeed. It's personal, you see.

On an individual level I can only comment as an older man who finds himself in the grocery store with other older men. We are all creeds and colors, but that is superfluous in two places: the beer aisle and the chip aisle. There we are just older men in profound meditation, a subculture apart, bound by experience in the belief we know better than to believe we know better.

We even have the same physique. This is not genetics, but conditioning. Our chief form of exercise is kicking ourselves and this develops the same muscle groups. It is also outward and visible evidence that we know how to have pasts.

Problem with Middle East is too much past. Whoever was there first has to deal with everybody else who was there first too. They have aligned this absurdity with the disposition of their immortal souls, which any old guy in a grocery store will tell you is just silly. Result is, you get deevolution to whatever mental age children spend most of their time running at each other.

In fairness to children, they possess joy. They feel what Virginia Woolf likened to bursting from the schoolhouse door on the last day of  term: "sudden joy". Later, we find joy in finding chips, plain chips with no fancy-shmancy seasoning and health stuff in them, and calling all the other old guys over."They're here, bottom shelf, found 'em!" Then, as one, we shuffle off to the beer aisle, strong, joyous, united and search for...well, everybody likes a different beer. I like stout, others prefer pilsner, lager or some excellent non-alcoholic brews. At that point freedom is best served by divided forces and we accept that. Why is it so much easier in a grocery store?