I don't usually get political but this is a true enigma.

When I was little, I read Donald Duck comic books. There was an inventor duck named Gyro Gearloose who came up with wonderful ideas in the company of his little helper. Little Helper never said anything. He was just sort of there, scampering around Gyro's feet, catching things he dropped and quietly saving things from going very very wrong. He was quiet because he had no mouth --his head was a light bulb, an incandescent light bulb. 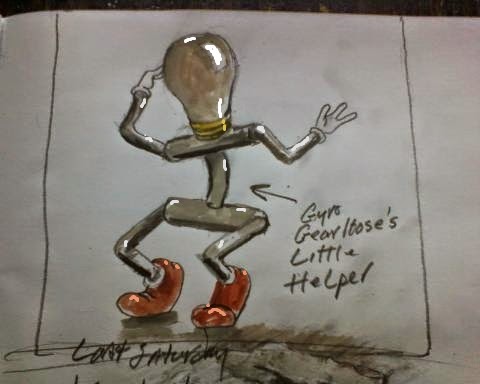 Little Helper only had two fingers on each hand. This is where the Peace Sign came from. More importantly, Little Helper defined for me the anatomy of the Illuminati. I started thinking about the Illuminati after writing a poem about a baby last week. 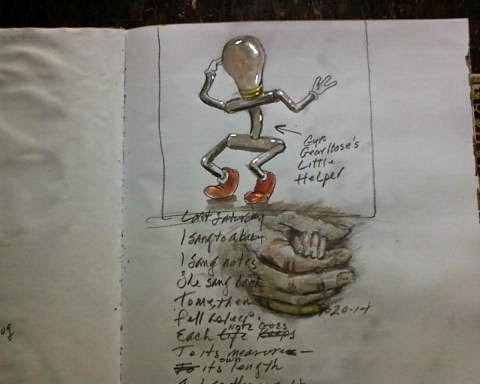 As one gains in experience, one learns written history. Historically, Illuminati is most connected to Bavarian Illuminati, an Enlightenment-era secret society founded by Adam Weishaupt and a few friends in 1776. They opposed superstition, prejudice, religious influence over public life and abuses of state power, and supported women's education and gender equality. They held meetings, advertised, published tracts, lobbied the political system and were of course outlawed by state and church in 1785.

We learn two things. If you're going to have a secret society to enlighten the world and make it a fairer place, don't tell anybody. Just do it. Don't overthink it, just let the universe pour through your head like Little Helper or a baby does. No kidding, in hierocratic theocracies humanism is considered subversive, just as democracy is discouraged by oil-rich countries or any contentious tontine surrounding a donkey-engine chugging in a hole. Under such misrules, the Illuminati --or any proponents of egalitarianism-- are among the first folk lined up and shot.

With the more recent mystification of Illuminati came some important questions. If you could nudge reality around with your mind, even just a little, to make things better, would you tell anybody? Me neither. Babies have the unimpeachable protection of being adorable, but what about Little Helper? Sure, he's kind of cute but what happens when his bulb burns out? Already, nations around the world are banning incandescent bulb replacements in favor of less ecologically friendly ones. Could it have to do with most of the world's tungsten coming from China and Russia and, until recently, bought by America? I don't know, do you?

We were sitting outdoors, watching the evening darken into deepest blue. It had been seven months since I had seen Uncle Eyeball and was surprised when Norma leaped from her chair and plucked him from the sky. I thought she'd caught a fruit bat --a habit I've been meaning to speak to her about-- but she held an eyeball up and I was overjoyed at the prospect of his renewed company. I was, however, confused by his altered appearance. 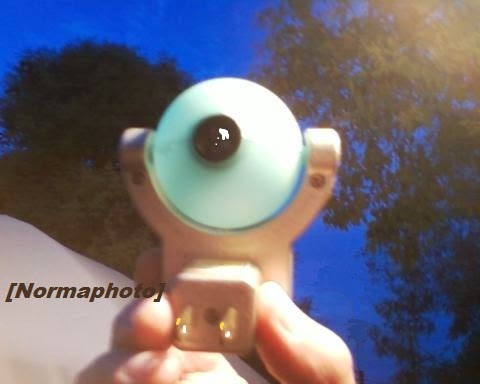 "Uncle!" I exclaimed, "you are much changed since last we met. What has happened?" To which he reminded me, in no uncertain tone, to adhere to the strict form and protocol that have ever-presided over our conversations. Oh, very well:

Dear Uncle Eyeball,
Why are you shaved and hatless? And what is the purpose of your pronged appendage? --Geo.

Dear Geo.,
Since last we met, I was drafted by National Security as a surveillance device, examined by their highest echelon of intelligence-gathering technicians who instructed their highest echelon of cosmetologists. I was shaved and stripped and instructed to spy on seditious insurrection unnoticed, disguised as an indoor moon. The purpose of my "appendage" is obvious. I was referred to top secret electricians who converted me from the sustenance of imagination and fitted me with prongs that fit any standard household 110 volt outlet. Kindly plug me into that one on the lamp post behind you.
--Thanks, Uncle Eyeball

Of course, we complied, but there was a complication. As Uncle recharged, he also glowed and projected a figure, an impressively uniformed figure, upon the bean tent. It was difficult to get in one take, having blindingly bright teeth, hair and gold-braid all over him. He said, in most mellifluous and commanding tones,

I was taken aback by Uncle's response.

Dear Geo.,
They've done it again! Every time I get even slightly free of them, they activate some crazy sub-routine that asks questions that would go right over my head if I had any head instead of just an eyeball. Then they lure me back into the dark work of their world. Unplug me now. I'm fully recharged, ready to fly away with their cause and fail magnificently where others would be merely successful. My blessings, nephew, and do speak to Norma about the dangers of bat-snatching!
All my love, Uncle Eyeball

I did as instructed and watched Uncle streak upward and out of sight. We then directed Captain Troy Handsome to some neighbors across the south field. Unnatural? Yes Captain, they play music that sounds like tennis shoes in the dryer. Good luck with them!
Posted by Geo. at 1:19 AM 36 comments: Links to this post

In an effort to resolve last month's ambiguity regarding Poppy, I offer the following transcript:

It begins with a few favorite objects, a brass leaf that one holds and twiddles in avoidance of nicotinic meditation, a smooth stone from the French Riviera and a little wooden plug that popped out of the furniture. One sets them side by side. One gets out the watercolors and pencil and it begins. 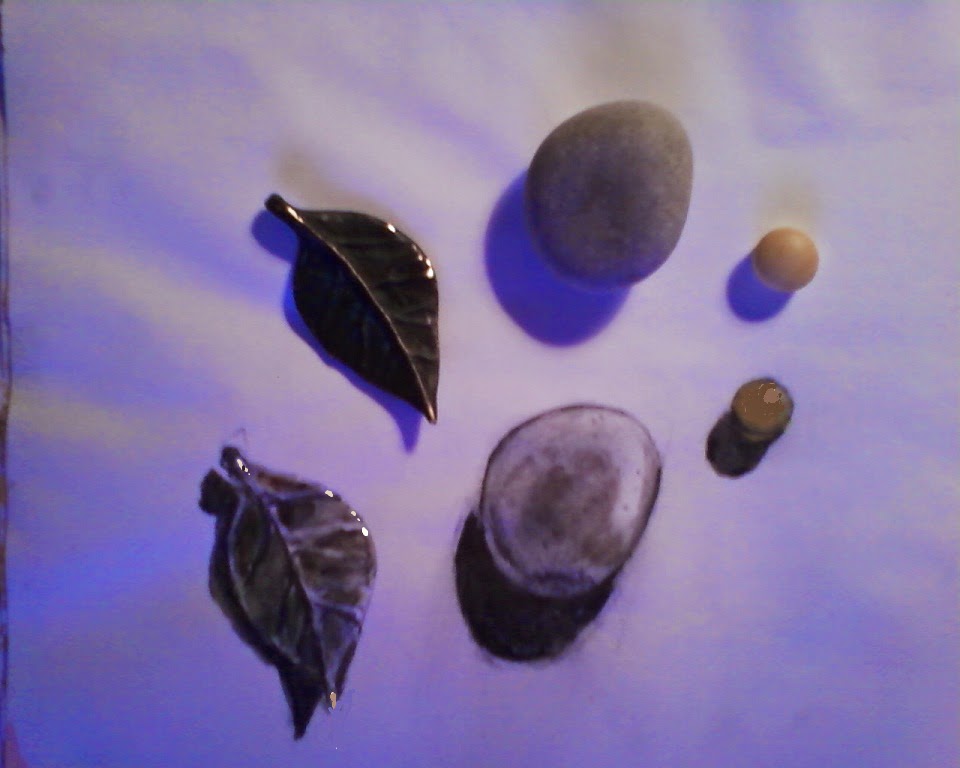 I draw them. I doodle. I paint. I return the enchanted objects to their place on the sideboard and return myself to the sketch pad. Decidedly, I doodle some more. After I label the doodle, the eyes appear. I recognize them immediately. 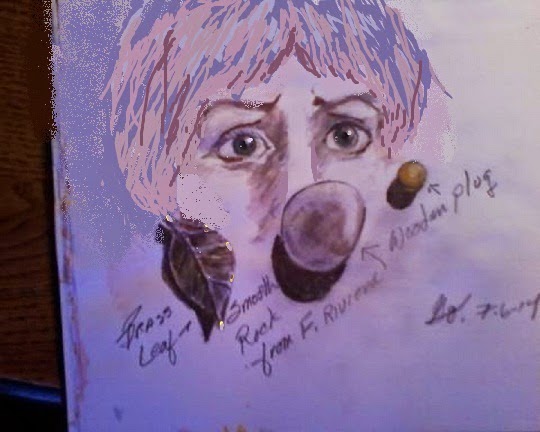 "What's this thing on my nose?"

I could say it's nothing --hardly noticeable-- but one look at her eyes and one understands the danger of casual falsehood. I can't lie to Poppy, not because she won't believe me but because she WILL, utterly and profoundly. Lying to Poppy and having her believe it is not something one wants on one's conscience.

"It is a doodle, a doodle of a very smooth pebble from the French Riviera."

"Each stone is a study of the world done in little, Poppy."

"It's about a report you sent in a while back, called 'Pumpkin Pants, Evolution Or Creation?' Was that entirely factual?"

"Well Poppy, I'm a bit surprised. You know the present is only marginally dependent upon the relative past, but past and present both are predicated on another temporal area."

"Falls out of the future, Poppy, as does the present."

"Wait a second, you know I'm writing this down, don't you?"

"This is my evaluation, isn't it?"

"Oh boy, now I get to say it: My pleasure, and my privilege."

"Everybody knows you're a girl now too, Poppy."

A brief definition of the cosmos:  it is the part of the universe we understand. Since the mind seeks ever-expanding regions of organization,  particulars of the definition are not fixed. Cosmos, because it includes meaning, will go on as long as there is intelligence in the universe. This (C. bipinnatus) is also cosmos: 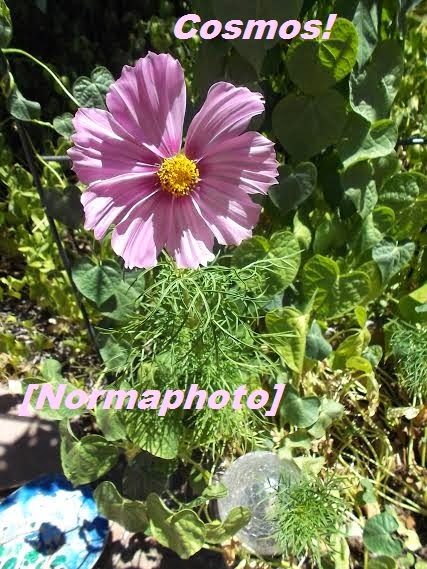 Photo was taken yesterday by Norma, who owns these feet:

Her feet, you may notice, are, at every geometric point, equidistant from each other. This has always fascinated me but I never mention it to her because she would self-consciously withdraw them and I might never see them again. I am this: 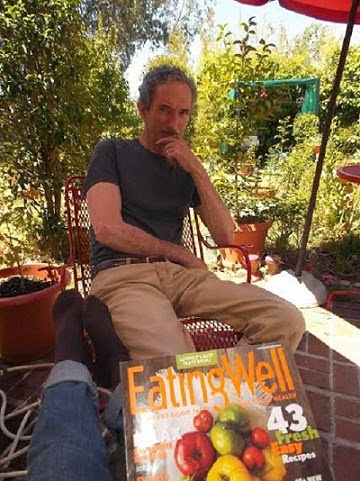 We are sitting in chairs because the temperature is ranging --as it has for the past week-- between 100 and 110 degrees Fahrenheit. We are procrastinating. Le jardin, décidément, he suffers!

Procrastinators survive California summers. Go-getters do not --heat destroys them. In the absence of motion, it is not so bad and one feels like one might be able to accomplish something, but that is a dangerous misapprehension. Sometimes you must trust nothing you see or feel. That is when thinking comes in handy. Californians think this: are we young and hydrated enough to venture farther into the yard and gather plums? Can we at least have plums? Then we meditate upon the question, consider our ages and past histories of this and that. No, we do not live in the pure present! Nor do we abolish our selfish concerns --our egos. Any guru who demands abolition of ego is an idiot, has no garden, eats poorly and is stinky!

We rise and venture further. We harvest: 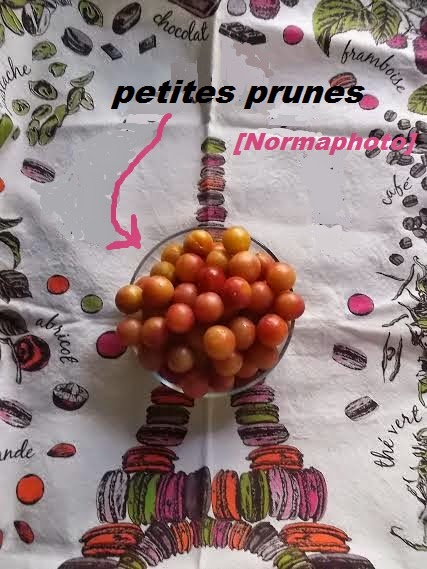 We gather plums! That's about as Californian as it gets! Then we repair to the air conditioned indoors and remain there. Californian or not, we are in our mid-sixties and have no business tempting sunstroke, but alas we do it  anyway!