Heading Back to Earth

If you've not experienced this automotive enigma, as many  of us haven't according to trusted surveys, I thought it apposite to give this Normaphoto the attention it deserves. It was taken 6 years ago from the VW Van on Highway 101: 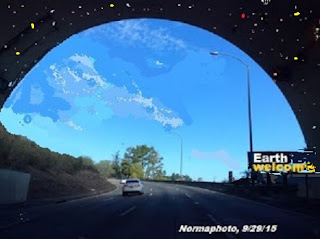 Road sign just says Earth Welcome. closing e is a tad garbled because it was painted in prehistory and they didn't know about es yet --did their best though. Upper Letter was added later to "arth" after the Great Prehistoric Vowel Movement resulted in legal adoption of 'E' and, in lower case court, judged in favor of 'e'.

This was a tremendous personal boon. My own name benefited : Geo. which, sans central vowel, is just "Go". I never knew if I was to start some uncertain something or just leave.

I may be mistaken about chronology but I do know my grammar and spelling. Also, the photo should be useful to others who come to this planet from rural cosmological extremes.