In 2009, when I was a boy of 59, I wrote a blog post that got NO comments. It was about the universe and time and I figured nobody cared very much --but I got to thinking, which sometimes helps. I thought the post hadn't enough visual aids to depict the birth and contraction of the universe. So, after a decade of research, I came up this evening with a highly detailed scientific graphic of reality: 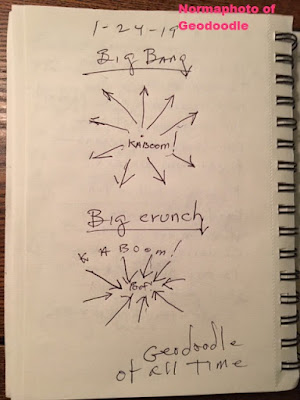 From 2009: Presque Vu
Deja Vu and Jamais Vu are words brought to us originally by cultural anthropologists who ventured into into places like darkest England to study temporal lore of tribes frequenting Ley Lines and menhirs like Stonehenge, then, for reasons unknown but on the tips of their tongues, report back exclusively in French. Their data was then seized by psychologists, who were seized in turn by physicists and astronomers, drugged, danced to exhaustion and a new tribe was formed.

Between the Big Bang and Big Crunch the universe goes thru cycles of expansion and contraction. During expansion, we remember a real past attending a variable and unseeable future. In contraction, because time is reversed, we remember a virtual past which, contrary to the entropic arrow of time, hasn't really happened yet. We percieve it as a normal, causal unfolding but accompanied by a crunchy noise and it just looks crinkly.

We don't remember the future in this direction either --backward from its beginning at the end of universal expansion-- for two reasons. Light is traveling backwards, out of our eyes and assembling all observables. Second reason is nobody liked the future very much and forgot it.

Because universe doesn't expand or contract quite evenly --less like a star-studded balloon than other stuff I shouldn't have machine-washed-- Bang and Crunch can coincide. Neither is time uniform --uniforms are dry-clean only. Time can constrict on an expanding field, which is how an acrylic sock can melt your turtleneck head hole shut in the dryer--creating an irreducible singularity. Thus do time and anti-time collide in brains and make deja vu.

Because the cycles throw us together from opposing ends of time, we get glimpses of ourselves coming back. Effect is more or less pronounced by what cycle predominates locally. My last planetarium visit suggests we are on spin. This also accounts for the disorienting experience of Jamais Vu.

Jamais Vu is the opposite of Deja Vu and consists of waking up in your pajamas --Jamais=french for jammies-- without knowing where or why. Sometimes Jamais Vu is inaccurately applied to waking up naked and painted jammy-like colors in the middle of a jungle with no clue where you are or how it happened. This is not Jamais Vu. It means you are a cultural anthropologist.

The Enigma of Randomization

I am sitting at my new computer. Someone who I will not name ( it was Norma), knew I was shortly headed to the post office and thrust three letters across the table at me, which knocked over a goblet of pinot noir. Its contents splashed across the laptop keyboard. I briefly watched the wine sink among the keys into the computer works. Then I looked up at the culprit,... 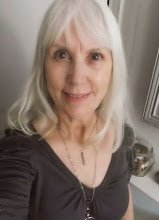 ...into her eyes, and, exactly as I did 52 years ago, fell into them.
"Let's go shopping," I said. And, as so often happens after random events, we did. I bought a new computer. It is red, like pinot noir. 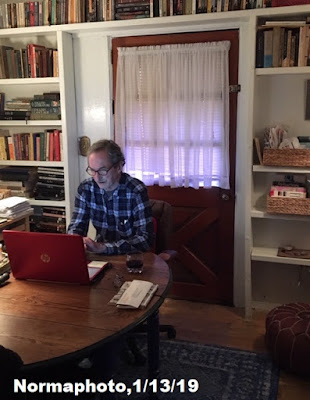 She bought stemless wine glasses with real heavy bottoms. Random things meeting amid limitless events. Consider: a star is a luminous projection of  hydrogen and helium held together by its own gravity. Two atoms coming together to light a universe. In the photo above you may see results of the same process in a crazy old farmhouse.

Two Silhouettes On The Shade

When the Rays began climbing the charts with a song about love, misperception and pareidolia, I was just a kid --but understood the pivot-point of their romantic ballad perfectly. The song is about a guy taking an evening walk down a street on which his girlfriend lives. He sees a window shade and silhouette tableau of what he believes is his beloved kissing a stranger. He bangs on the door and is politely informed that he's on the wrong block. Ooops.

Pareidolia needn't always be distressing or embarrassing, as I hope to demonstrate by my own experience and recreation. I too have often seen two silhouettes on the shade in the bedroom --the lampshade (what do you think I meant? --oh how could you?). Observe: 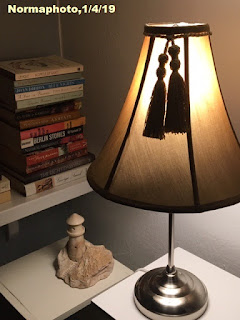 It is caused by two tassels (as things often are) hung from the upper shade-hem. Sometimes, while reading in bed --especially Louisa May Alcott-- I will look up and see two little women in earnest discussion on a stairway, a nudge : 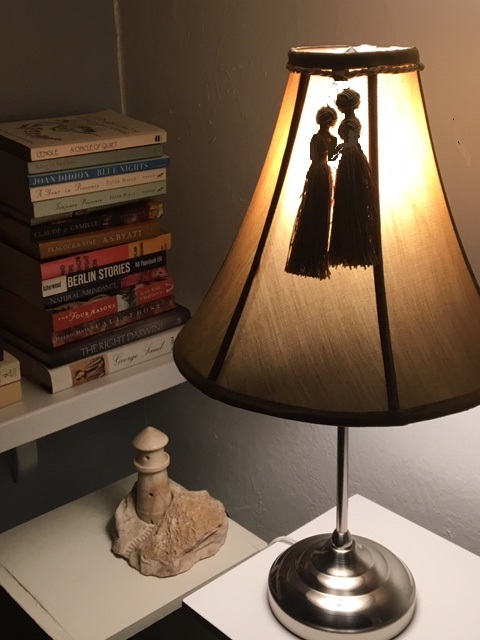 All it takes is a bit of imagination. Then that old song starts doo-wopping in the background and I forget about the waking world and its incessant awful news. I stop thinking about politicians I don't like --and other proofs of rat-human interbreeding. I quit searching, like a hapless horse for hay in a needlestack. Silhouettes are there for a good reason: they help us imagine and dream.
Imagine.
Dream.