Today is the closing day of February, a march in time. It is probably a good idea to write down some account of my memories and learning experiences from youth before they become vague and distorted.

I went to high school a very very long time ago. Here is a photo of me running track. Earth had cooled; I was in good shape.

By the time I evolved into a mammal (puberty) I realized I had to stop eating slower creatures and consider a career.  I consulted a certified school career counselor who said, "Find a job you don't mind too much and everything will fall into place."

My first job was cleaning teeth off the dance floor at the Coconut Grove Hall on Sunday mornings. Strangely, I tired of this and decided to go back to school --knowing I could never again believably disarm my enemies by shaking my fisted claw and roaring, "You can't insult me. I'm too damned ignorant!"

I began to learn, "He that troubles his own house shall inherit the wind (Proverbs, Ch 11, v 9)." This meant 2 things to me: strife in the home causes indigestion; indigestion causes wind.  By and by, extrapolation is inevitable: It is better for domestic life to go down the commode than back up out of it. I also learned what that little valve left of the pedestal is for!

I read. I read Westerns and learned what "drygulched" meant  --ambushed from above. Hoodwinked meant you could cry "Zounds, I've been hoodwinked!", which is sort of fun. But "hornswoggled" just sounded so pleasant to me, I'm not sure I'd mind. I am indebted, for much of my education, to Zane Grey --and to Norma, who took these photos in the woody end of our yard; 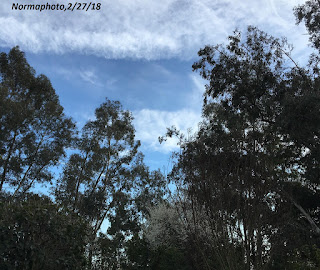 And under the trees I planted: 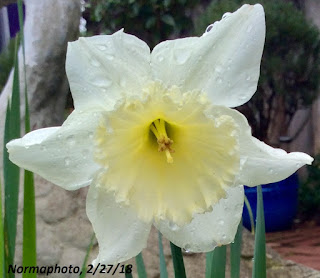 Beyond these cerebral enshrinements, there are numbers, 3 come to mind --BP, Cholesterol, Telephone-- that we should not forget. I have also found it useful to remember the answer to questions like this: In a leap-year, how many months contain 29 days? 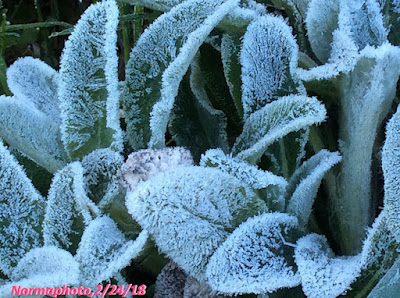 This is California. February. There should not be ice encasing Lamb's-ear leaves. But yes. There it is, a strangeness settling on the land. We have a leader who, for all good intentions he may have, looks as if he has digested himself and will implode, blast himself out backward, leaving only a ring --to be gilded and sold at auction. This level of tension is dangerous to stand behind, which is why the cabinet always stands arrears with mouths closed. There are also aides at ready to re-inflate the president with a bicycle pump. 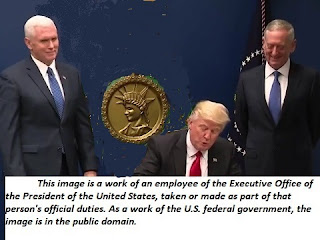 But yes! I garrulate. I am near his age. My superpowers of prior years --flight, x-ray vision, invulnerability-- have left me. My final superpower was the ability to keep my mouth shut, but (yes!) I lost that somewhere too. Careless of me.

The balance of this essay concerns age. Here is how I feel when waking up in the morning. I don't know anything but am pretty sure I am a mammal, don't think about who is president or whether he or she has organized thoughts --what? 2 hours?-- ahead of me (consult a globe).  I look at the highboy in the bedroom corner. What is a highboy? It's a chest of drawers that was called that when I  was a a kid. I lay there and think: "Drawer spelled backward is Reward." But yes! Socks!

It has knobs. Knob spelled backward is Bonk! This bonks me back in time 10 years, when I had some surgery during which I unfortunately woke up. My skeleton got so scared it climbed out the incision and ran off down the road. It was apprehended a half-mile away trying hitchhike on the interstate. Good thing too.

By and by, I wake to my world --as it is now, and as I am. There is a region of agreement where I align my delirium to that of modern society. I feel compassion for my fellow humans, and for myself. Have you ever noticed how hard it is, after all the work you've done --after all the unkindnesses you've done to yourself to reach your goals of family, security, politics etc.-- to confer a little kindness on yourself?  But yes, me too!
Posted by Geo. at 10:27 PM 31 comments:

"To be or not to be --that is the question:..." (Hamlet, act 3, scene 1). It seems insoluble, or so it has seemed to me since childhood. I began reading Shakespeare in 1963 and understood it was an important question. I turned 14 that year and was very fit --owing to the physical standards promoted in schools by the Kennedy administration. We were not strangers to tragedy, nor was Shakespeare. There comes a time at which one may become too fit. That is when we begin to think far beyond ourselves. A mere 55 years later, Norma showed me 3 of her photos, which resolved the question. Here is the 1st: 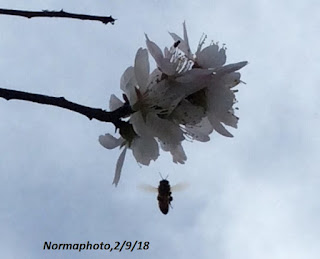 We are still invited to ask: To be or not to be? But are no closer to a solution. Therefore, under the almond blossoms we are tempted to repeat --perhaps with minds more opened... 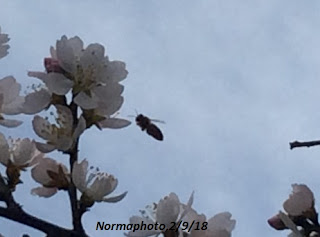 It is at this point of enquiry we must examine the question itself. Is it phrased in such a way that it can be answered? Not easily. This is where semantics must be invoked. We must remove the object of the preposition in favor of an object of nature. "To be" must emerge into nature from its long tenure behind the Bard's brow. Given these grammatical modifications and simple addition, the answer is obvious: 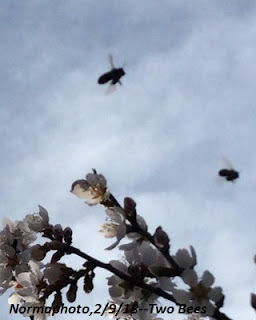 In Advance of Lupercalia

I decided to post this in response to Robyn Alana Engel's  general invitation regarding opinions on the 2/14 celebration and, of course, chocolate.

Romance Books, My Favorite Hot Parts but it seemed appropriate to trot it out again in observance of St. Valentine's Day. There are a few alterations  in  an  attempt  to "tighten it up" like I  was  taught to do in  school  but  they have largely failed. The serious questions and subject matter it deals with will doubtless withstand a few flaws in construction and research.
*********************************

What is romance really, hah? Having got to another Valentine's Day, we still have little idea how it came to represent romance, especially since the saint it is named for didn't have any head --clearly not an ostentation of sentimentality. I am more inclined toward the Roman frolic it replaced, Lupercalia, which took place from February 13 through 15 and included the 14th --our modern Valentine's Day-- as a sort of recess reserved for apologizing to relatives and livestock and trying to stand up. 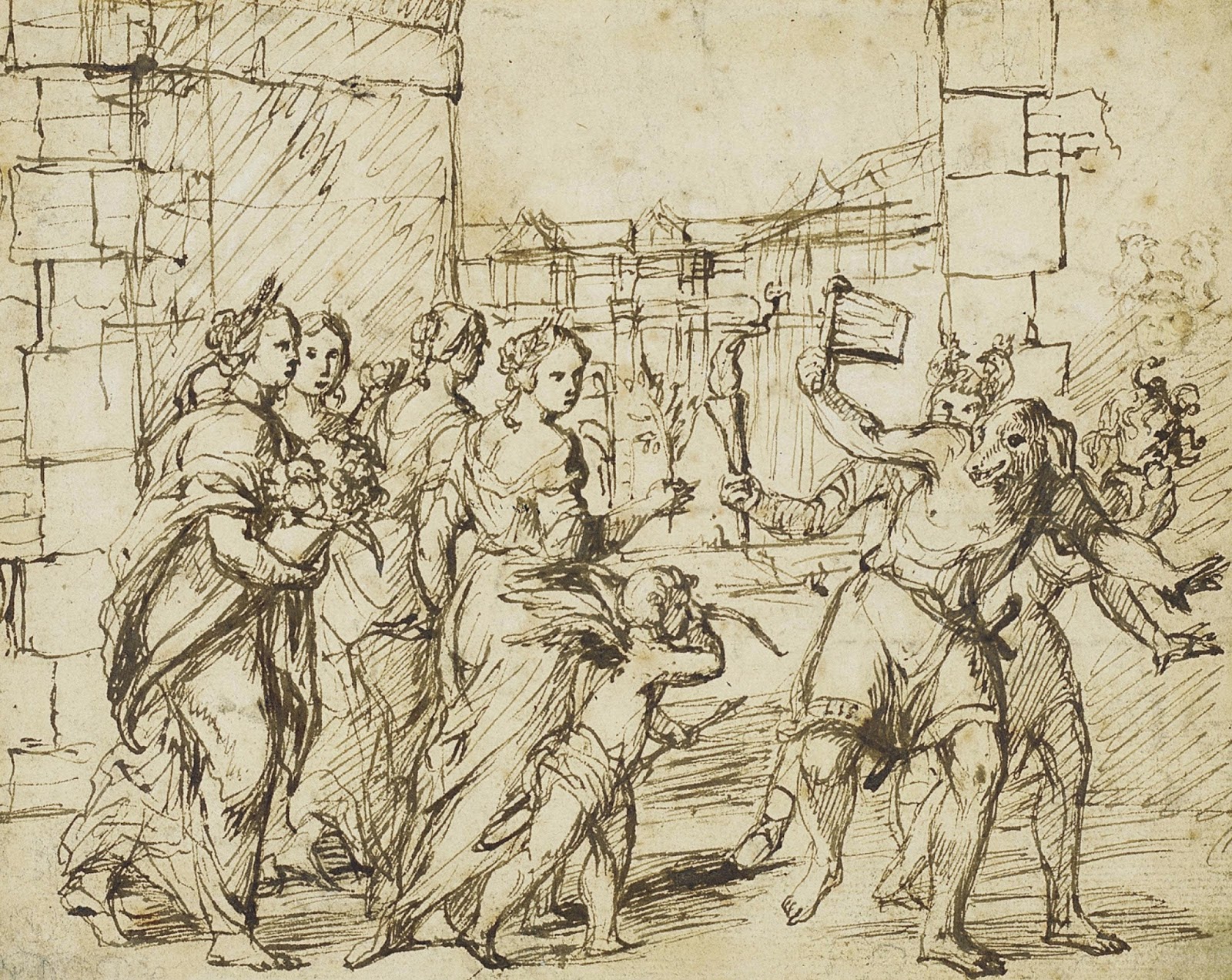 
Plutarch described Lupercalia: "At this time many of the noble youths and magistrates run up and down through the city naked, for sport and laughter, striking those they meet with shaggy thongs." The apt pupil of the human pageant has no difficulty understanding the decline of this strenuous recreation and its replacement by "romance books" --a very popular genre in our less aerobic modern culture. 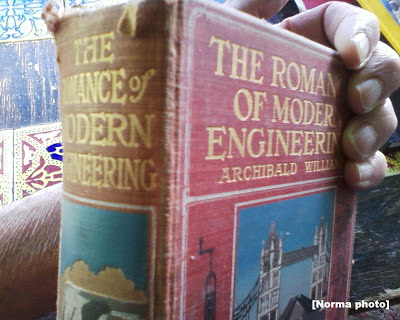 No. We must consider for ourselves what truly comprises the most Romantic technological and engineering milestones of all time. I would choose Velcro, gas-driven airplanes, two-sided paper and "even" numbers.

Velcro, still widely used, was invented by the Romans specifically for early horse-drawn elevators. They needed something to keep the horses' hooves stuck to the walls. It allowed horses enough traction to climb vertical shafts, pull elevators up from floor to floor, then back them down again.

Unfortunately, Romans failed to solve other modes of automatic ascension. Nothing short of propellers spun by internal combustion could lift the limitations of the horse-drawn airplane, which was confined to very low altitudes and velocities, but elevators are powered by Velcro-climbing horses to this day.

Romans wrote everything important on scrolls, or a single long strip, which they rolled up onto spools and corded on library shelves. If you check a scroll's table of contents, you'll find all subjects, chapters, everything listed on page one. That is because a scroll technically only has one page. It was not until the invention of two-sided paper that modern books appeared and tables of contents made any sense. Mathematicians were called in to decide what to call the back of page one. They suggested "two" and the even number was born.

A chittering in low branches caught my attention.
"Hello Earnest, what's up?" 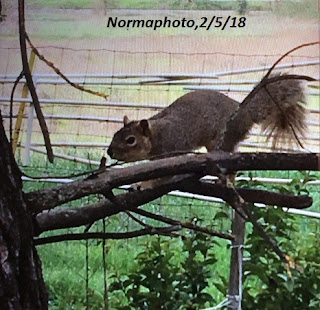 "I am up, Geo. I am wondering what that purple roundy thing is."

"Then come down. You're welcome to see for yourself."

"Ok, but no funny business. Don't eat me or anything."

"Of course not, Earnest. I'm not even a bit hungry for raw squirrel."

"I will feel safer if I sneak down. Things have been swooping at me lately --screechy things!"

"I guess, coming down now." 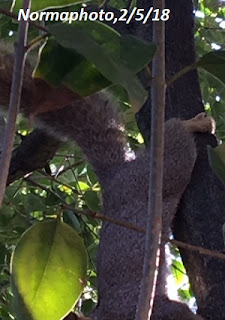 "I don't see any hawks, Earnest. Should be safe."

"What about the other swoopers --hooty things?"

"Owls? None in evidence during daylight." 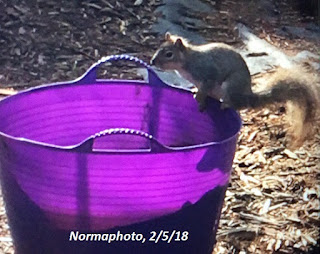 "It's a purple plastic pail, Earnest --half-full of bark."

"Tree bark, cedar and redwood. You've never seen them before because they come from far away, from the coast and from Lebanon."

"Geo., the scent is intoxicating, comforting. I want to get in this bucket."

"It's Norma's bucket, Earnest. She's been spreading these barks all over the planting areas, but I don't think she'd mind if you..." 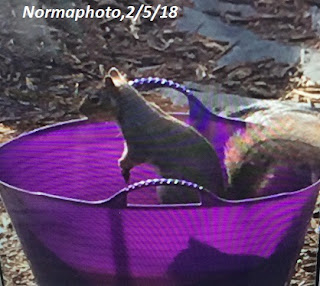 "Oh WOW! This is incredible! Geo., I smell primordial mountain forests, trees a thousand feet tall, land-masses calving into continents so many million years ago! I feel coastlines collide and pitch mountains far beyond our little lives, far before my life on this property."

"My dear, beautiful Earnest, you made a very tough decision to sneak down from the trees --my species did the same-- a decision with severe consequences..."

"Worse than swoopers? I felt so frightened!"

"Yes, far worse than hawks and owls, Earnest. That is not cowardice. That is bravery."
Posted by Geo. at 9:33 PM 28 comments: