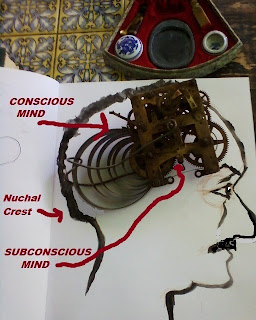 I worked 40 years (Hah, just see if I go do that again!), and for most of them I had to get up before sunrise and never got used to it. This was because I became a gardener early on --it did not require one to be house-trained.  Then, in 2009, I called in old.

In my working life I did nothing particularly right but there was a general and positive momentum toward settling an income in a humane economy. It allowed leisure enough to pursue my lifelong dream of retiring on the prairie to raise hornets. But this essay is not strictly limited to my successes in vespine husbandry. It is about the jumps.

For the purpose of our inquiry, I have included over this essay an x-ray of my head. You are invited to observe the chief mechanical systems of the brain: psychic constructs called conscious and subconscious minds. They are separated, with rather disappointing efficiency, by the nuchal crest.

The nuchal crest is a posterior bump on some human skulls that serves mainly as a head-hook to catch the edges of swimming pools so one might relax the rest of the body and chat with other nuchal crest possessors. People without nuchal crests --like my wife-- try to emulate and join in the fun but unhappily slide off into the depths. Another advantage of this crest is the extra cranial room it makes. As you can see, the x-ray shows a mainspring that has relaxed in some spots and snapped clean in others. With some stabilizing by means of baling wire, the added space effectively accommodates this neurological distemper.

Point is, although 4 years retired, I woke this morning from a dream that I was late for work. In the dream, each time I looked at a clock I was another hour or two later and quite beyond my repertoire of phone-able excuses. I woke with the jumps, and the impossible question: what does time measured on a dreamed clock measure? That is a question left to the conscious mind. It cares.

Subconscious mind doesn't care. It finds no purchase on the pool edge, slips under and hatches more anxious dreams based upon outdated data. Down there, it eludes reason no matter how tightly our net is drawn around it. This gives one the feeling, not of having slept but having spent the night in a Beckett play, proving even retirees work hard for their money.