How Men Think Or Old Goats 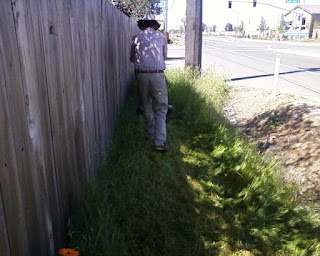 On Saturday, Frontier, a major ISP for California broke down all day, so men ventured outside and did yard work. There was a lot of squinting because it was 95 degrees outside and many of us just crept back indoors and wept softly where nobody could see. Higher cognitive functions are elusive on days like that. But there were sightings of one man who stayed out and mowed his front fenceline, an event that might have faded like so many other urban myths had his wife not taken a photo.

When she was done, Norma told this caprice of nature there were goats loose in the field. His opinion was, "We don't own goats so it's not my business but, if I encounter them on the fenceline and conclude they are lost, I will show them a map. Goats are intelligent and that's usually all they need to find their own way home." This left him to his own thoughts:

Why do runway fashion models look like they know something I don't?

Ooh, there's a hummingbird! So tiny. Surprising you can fit enough parts in one to make a bird. 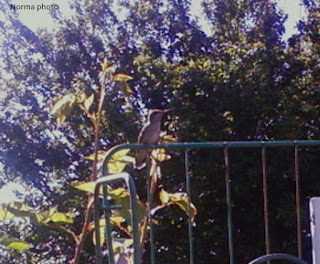 Is it philosophically possible to give up religion for Lent?

And what about head-wedges? I mean, they have wedges to keep doors open, why not little wedges to stop our heads rolling off pillows at night and getting stuck under things?

At which point the mower coughed. He pulled it around the fence-corner and got out his plug wrench, kneeled and thought:

Ants on a man's knees makes him wonder if our species can ever expect reliable social cohesion until we evolve antennae.

Man looked up and saw goat. Beyond that, man saw another goat. They were tethered on ten-foot ropes to steel fenceposts where the fieldwire starts. They had eaten down the tall grass where he was going to continue mowing the fire-break. Who did that? If I was that man, and I'm not convinced otherwise, I would credit a neighbor across the field. I think he is from India. His family speaks a lilting language and works outdoors a lot with chickens and goats. I see them and they see me. We've never met. I would say he led the goats over to help me when he saw what I was doing. And if I was the man I am writing about, I would go tell Norma the goats were not loose but we've made some new friends. So the man did.

That leaves fashion models. Why do they look like that? 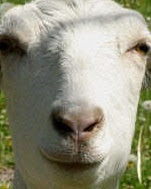 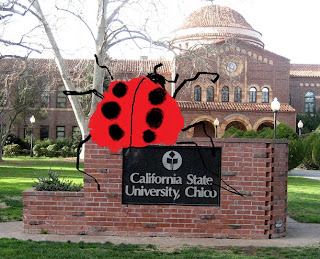 There are many definitions of knowledge. We may begin with Aristotle, who divided knowledge into three parts: theoretical, what wants knowing; practical or praxis, which ought be known; poetikos, what we think we know before it gets shoved way back in the fridge and turns into something else. One may augment this catalogue by consulting other philosophers, Descartes, Hume, Kant, Locke, Mill, all of whom explored particulars --method, substance, sensation, synthesis, transcendentalism, intuition, induction and deduction-- but I never went beyond Mill for a simple reason. When I was in grade school, people knew only half what is known now so encyclopedias just went up to M. Our school did get an advance Britanica that went clear to end of the alphabet. We were excited and suspicious. Some of us snuck into the library and peeked. Volumes N through Z were just blank pages.

When it came time to go to college, we students were asked to write our choices on a special form with a special IBM pencil and turn it in to the office. I wrote "Chico State" on mine and it was fed into the school computer, a recently upgraded Babbage Engine designed for weaving 19th century textiles but could sometimes calculate polynomials during lightning storms. It enrolled me into "Coccinellidae" which I, being young and adaptive, figured was close enough.

When I got to college it was immediately obvious some mistake had been made. The desks were tiny. I didn't fit. And all the courses were on the same subject, aphid-eating. When I asked what majors were offered, the registrar answered, "Aphid-eating, of course! For lady-bugs there are no other professions." I was refered to a counselor who didn't ever seem to be in.

I am still haunted by the idea that I may have stepped on him during my first frantic visit.
Posted by Geo. at 4:55 PM 5 comments: Links to this post

Doubts Regarding The Anonymity Of Anonymous 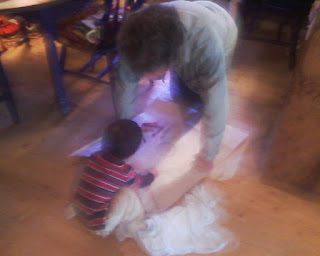 I have, over the past year, posted some scholarly articles about Anonymous. They have been received well by the academic community. There has been welcome constructive criticism: Where are your experimental results?; Please qualify your references; Go jump in a lake. There has also been some reticence of response. Reticence is excusable, considering the volatility of social issues attendant to Anonymous, but much of the criticism, although well-meant and often helpful, is what we philosophers call Uva Acerbus*.

In the photo above, you can see my lab assistant (and distinguished graduate-student) and I conducting an experiment with butcher paper, crayolas and other precise philosophical instruments. True, he and I are related and hard to tell apart so I should specify that I am the one walking on my knuckles. We drew randomly on the paper, stopping only for snacks and a nap, and found each graphic figure had a name almost before it was completed. A scribble with a head was a "Nilduck", while a head with a scribble was a "Snoit" etc. By the time his mommy came to collect him, my collaborator had named everything several times over. So we must ask:

Anonymity, is it possible? Is it really? This is the question we will address today.

Two Greek words, An (without) and Onoma (name), compose the appellation preferred by the user of anonyms. In fact, Aristotle would have considered Anonymous a "privative name", a name denoting a lack or absence of a name --but a name none-the-less. This coincides philosophically with the "negative name", indicating a term of the complimentary class --the collection of all things that do not belong to any given class. The question is settled mathematically by (Bertrand) Russell's paradox: Is a value, belonging to a set of values that do not belong to any set, a member of its own set?

Well, if that isn't a cue to dash out and experiment I give up.

In order to maintain objectivity I enlisted the aid of longtime friend Wendy to conduct the following test. My wife and stunt-double, Norma, would simultaneously declare herself anonymous and hide her identity with a big hat. She was immediately attacked by tropical birds, lorikeets I think, and that should settle the matter to the satisfaction of the scientific community. 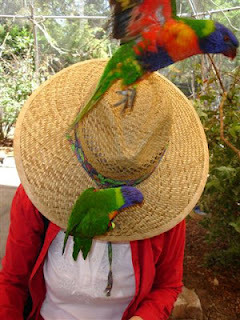 From data collected, it is the conclusion of this researcher that Anonymity is not only theoretically impossible but also practically unfeasible. Practitioners may find temporary success saying they are not themselves but, once the birds come down, the game's pretty much up.

Consider our specimen. This is a picture of a man in his driveway. He keeps it graveled and trims its border of tamed trees. It has not changed in many years. It runs along his place to a gate that gives onto the road. He understands his driveway.

He does not quite understand the road. Thirty years ago it consisted of two narrow lanes in deplorable condition known only to a handful of hicks. Then, by and by, pastures were sold and developers swooped. Housing tracts, apartments, strip malls sprang up and people piled onto the little road, which had to be widened into four lanes and traffic lights appeared. Traffic lights, he suspects, are alien machines that feed off human aggravation, but he understands the growing part they play in metering the flow of madness in the world.

He does not understand the world. It has too many problems, variables, enigmas, too many of which do not lend themselves to purposeful study. When he asks questions, he gets confusing answers rigged with dismissals that lie in wait with other subtleties. When he was young, his friends read self-help books to see if they were ok. He tried that, but felt left out because he could not develop a neurosis --he was ignorant and didn't know how. He thought a minute or two of quiet brooding sorted most things out. And so he grew older and had not examined his mental capacity. As a result, he was finally assailed by the suspicion that he was not very bright.

Despite all this, he has always hoped human affairs, by some amazing device, would become clarified. Maybe it will be a new wave of leaders, bosses and enlightened planners who consider humanity more than an exploitable infestation. Maybe it will be religionists who can reconcile chiliasm with our longing for free will, or justify evolution where there is no scriptural reference to Creation ever ending. Our specimen thinks about these and all sorts of reasons why we have become so mysterious to ourselves.

But over the years, he has simplified his demands upon himself. He may not understand everything that comes onto his property but keeps his car serviced and his gate in good repair. He understands these things. He also understands his commode, which is basic to sending some things off of his property. He knows how to lift the little brass piston out of the tank-valve and clear the grit that builds up in there. Certainly important skills, representing many that I have catalogued as his cultural anthropologist --a service I provide in addition to brushing his teeth. 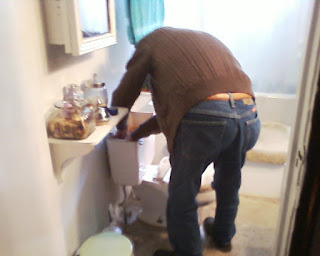