Having addressed three specific years in prior essays, 1892, 1964 and 1510, it would be apposite to expand beyond them and examine an epoch. An epoch is an interval memorable for extraordinary events --the historian's way of tying up loose ends. For this purpose I have selected the subdivision of time between one million B.C. and seven P.M.

It was during this period that humans made art. Art is an objective expression of thought and feeling and is mostly about stuff we like (or it doesn't sell). Sometime in the stone age people realized we were human and full of consequences. This had the aesthetic effect of scaring the hell out of us. So we decided to emphasize desirable consequences over undesirable ones. We invented beauty! Because I type slowly and have other things to do, this study will be limited to the evolution of Venus and the abolition of cage crinoline.

Nearly any human activity can result in art, and whittling a clod is stretching it but that is precisely what happened in the stone age. It resulted in The Venus Of Tan-Tan: 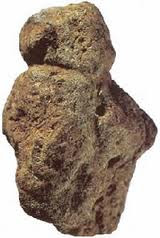 We could examine prehistoric Venuses --all of which epitomized feminine beauty in later ages-- of Berekhat Ram and Vaussel but they were still hip-and-bosom-heavy fertility figures unlikely to happen in nature or last long if they did --especially since they didn't always have heads or arms to do anything useful with. Despite the beauty they conveyed in their times, they all look like pocky rocks to us. It is at this juncture we must proceed to Venus de Milo. Unlike most of her predecessors, she had a head and, before they fell off and got lost (and let this be a lesson to everybody), arms.

This Venus was sculpted around 100 B.C. She looks like a woman. Archetypes were changing. An artistic and creative faction had ascended to the idea of reality and settled for it, but they were in a minority. Revolution ensued. Lots of people didn't want the paradigm of beauty to look anything like a real person. Opposing sides of this conflict were occupied by idiocy and truth. For a long time, idiocy won --as an examination of underwear attests. I refer to cage crinoline.

Here I will draw liberally upon an article in a back number of Stereo World magazine (from 1996) because I wrote it. Crinoline was a stiff, heavy fabric of horsehair and linen. Worn as a petticoat, it satisfied fertility configuration by exaggerating female contours beyond nature. Lighter cotton crinolines emerged in the 1800s. Gathered, bunched, bound, glued and sewn to other tackle, they equaled the original in strength and unlaunderability but didn't surpass it until 1856.

A patent was issued that year for a crinoline cage of steel hoops rigged to a waistband by tapes and wires. It not only looked like a big birdcage but posed the same problems in mobility and hygienic access. In the 1870s, after improving only from irritant to insult, crinoline departed the world of fashion. Its end was not peaceful.

The National Women's Suffrage Association formed in 1869 to challenge laws that denied women authority equal to their responsibilities. When, in 1872, Susan B. Anthony got arrested for voting, the cage crinoline became an especially effective metaphor.

This thrusts us forward to seven P.M. One hour before the traditional curtain time of musical theatre, I am standing beside a modern Venus, about to go out. She has a head and arms and normal contours, which I have appreciated for a good portion of human history and, I can attest, constitute a modern archetype. She also votes. 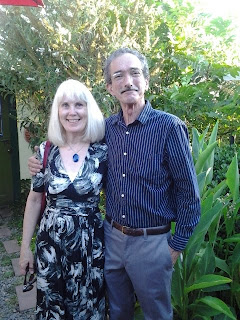