This corner may not mean a whole lot to people now, but in the summer of 1967 --50 years ago-- it was a symbol, a rallying point. I was worried. Everybody was worried.  Some excellent worried people got together and planned something where the district around this street sign gives onto Golden Gate Park. John McClaren, the gardener who built the park, meant it as a place of peace where people could go and enjoy the forest he'd dreamed and created on the dunes. 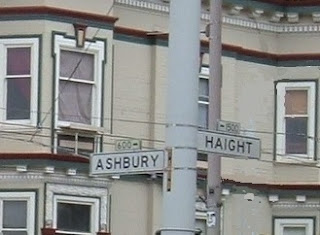 
Wheew! Half a century. I wrote a poem on a piece of binder paper, under a tree at Sacramento Community College. A girl walked over and read it. She asked if she could have it. Like now, nothing I wrote was sacred to me so I tore it from my notebook and put it in her hand. Some months later, a thin volume of poems was handed to me by someone else. Here: 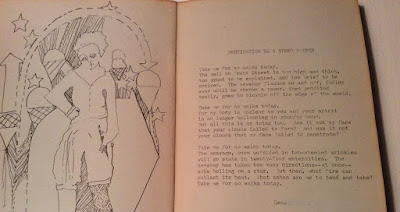 I take great pleasure in rewriting the 1st stanza:
The wall on Front Street is too high and thick,
Too grand to be explained, too brief to be noticed.
The newsboy flashes on and off, fading away
Until he throws a paper --then peddling meekly,
Goes to bicycle off the edge of the world.

I didn't do the artwork but have this evening narrowed it down to Adele Davalos, Rick Almeida, and Chuck Moore.  I saw Chuck at a hotel restaurant 30 years ago --he was working in Hollywood-- but I forgot to ask him. I do recall the closing lines of a poem by a roommate 50 years ago:

He is now a Zen teacher in Oregon.

I will close  with a lovely song by Mary Hopkin --throughout which one feels an homage to Bertolt Brecht, Elizabeth Hauptmann and especially, Kurt Weill:Mary Hopkin, "Those were The Days"


I know I usually telegraph enigmas with humor in this blog, but today I felt a need to address a  serious subject. 50 years ago, I felt peace was imperative. I still do. Yet I see it slipping away. I know that, according to scripture, it takes several generations to get rid of a bad idea, but thought we'd be further along after a half century.  This dismays me, but even worse, it embarrasses me. I have measureless faith and trust in the current peace movement, in this vibrant new generation of activists, but we must never forget our early reflections on the subject. We must support their efforts and give peace a chance.

A Return to Love

A Brief Sermon On Love 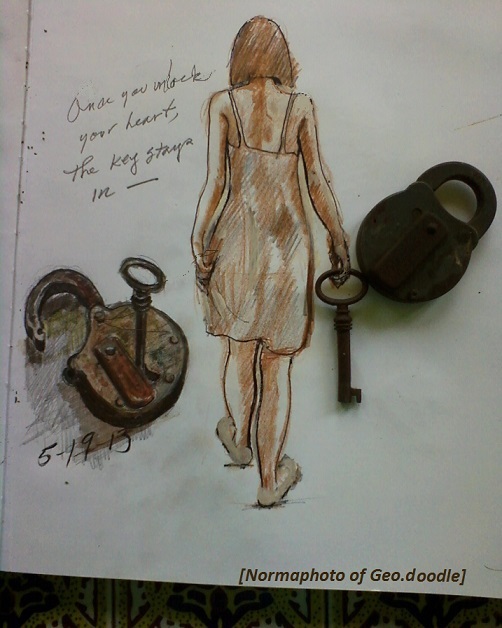 It is Sunday and I have begun with a doodle, a local monocular  tradition. When our valley is in a state of barometric flux, some of us wake up and celebrate with migraines. It is best to keep one eye closed --the hurty one-- which induces clumsiness. Not clumsy to the degree recorded by Ecclesiastes [(10:18), "He that diggeth a pit shall fall into it."] but still pretty clumsy, so movement is kept to a minimum and no pit-digging for sure.

I only ventured out to the pumphouse for a headache pill and came right back. Forgot and carried the pumphouse padlock in with me. There it is up there, and a doodle I drew of it. I drew a human between them and that's when it became a sermon, a sermon about love. We'll start in the past, back when I had two eyes open and radios contained little orchestras.

The little orchestras played  love songs mostly. I thought I was in love once or twice but my hat had only caught fire --as often happens. Then one has a chance encounter. One sits at a table somewhere opposite a stranger, and since decorum dictated --at the time-- strangers remain even stranger, a strange thing happens. First, one's past and present tenses are confounded.  Then one notices the other's eyes and decides there is something really quite elegant about them. Then one falls in love.

Oh my. It's what, 1968? The thoughts: "Why now?  At a time when our best and most progressive leaders are shot dead at their podiums, when theocon regressionists and international belligerents consider God their quaint subordinate, when I could be drafted or jailed, when there is so much to do, why now? Why not ten years from now, five even? Why now?"

Let us turn to Acts 9:5-6 - "...it is hard for thee to kick against the pricks."  Because there are a lot of them out there, and one only has two feet,  we must rely upon the transcendent power of love. Love doesn't care what's going on. It hits when it hits, incapable of putting itself off no matter how inconvenient it is. It, I mean Norma, finds one doodling the pumphouse lock and asks, "How's your barometer-head?" And, miraculously, my eyes are opened.
Posted by Geo. at 12:26 AM 25 comments: Links to this post

Estivation is the summer equivalent of hibernation, a period of torpor during hot weather practiced by animals that have any sense at all. When you wake on a summer morning and your eyes look like this, 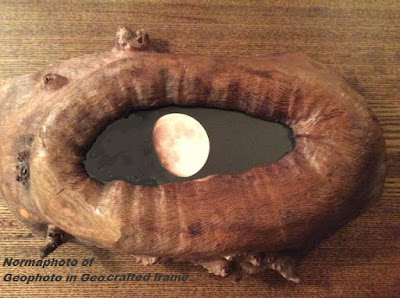 it's time to estivate. Ok, my illustration is really a photo of the moon I took through a telescope and framed in a big knothole --but it's close. How close?

That question brings us to the next photo, the pumphouse thermometer out back. This is how it's looked for a week: 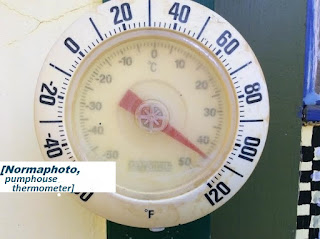 The moon keeps about 240,000 miles from our planet, and has done so for 4 billion years. The sun, however, is not satisfied with that and varies its distance. I'm too hot to pore through my astronomy book for exact data, but I guess I know a thing or two about thermometers. The good ones are graduated in both Fahrenheit and Celsius so we can calculate our solar remove.

Here's how: 1st, divide the Fahrenheit scale by the Celsius scale; 2nd, label the quotient in miles. That's it. Pumphouse thermometer reads about 112F and 45C. Therefore the sun is only about two and a half miles away right now.

You don't want the sun too close. Life there is hard. There's a kind of fish --made of titanium and asbestos-- that glows red and transparent in the sun's  heat and swims over oceans of fire, but less adaptable creatures must content themselves with family generations that only span 1 billionth of a second.

If there are any errors in my calculations, I shall correct them in autumn --hopefully before winter hibernation.


Let's begin with reference to a recent post (from  the 8th, I think) about a mysterious couple of newcomers who spoke like little sleigh-bells. You are invited to click here and see how they were identified in the comments section.  Now we know enough to go on with. Here's the nest on the 11th: 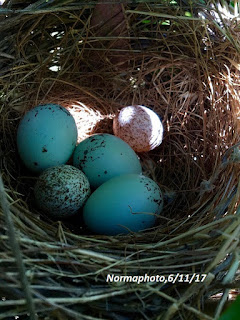 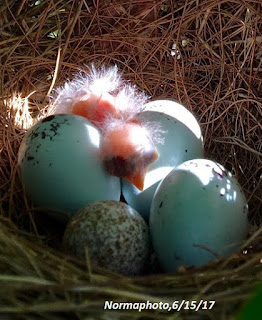 Mrs. Otherspecimen, our longtime friend, had earlier cautioned us these might be Cowbirds, but upon seeing this photo, opined it was a little old man with huge sunglasses --a notion we considered seriously because Norma is married to one. 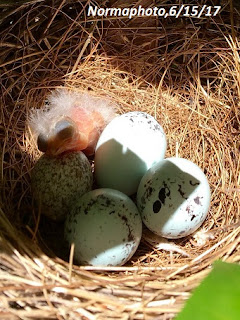 This theory was lent some credence because the little subject seemed clumsy and disorganized. Then, that afternoon... 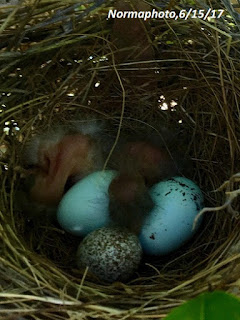 ...there was another one, which brings us to yesterday... 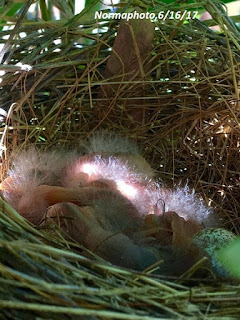 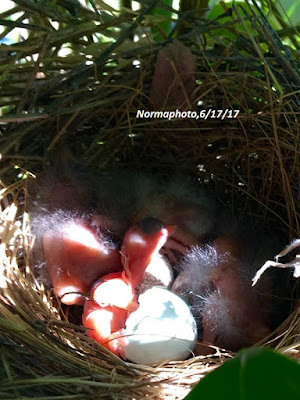 All their eggs have hatched. Here are  their full-fledged parents: 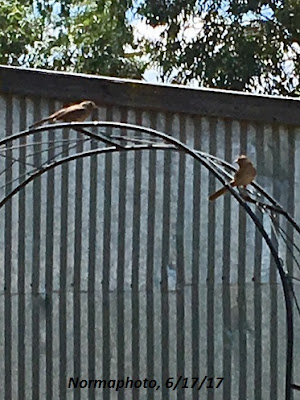 I don't know Towhees well enough to determine which is male or female, but they both tend the nest equally and I will use that precedent of parental parity to wish everyone a
Happy Feathers Day!
Posted by Geo. at 5:12 PM 27 comments: Links to this post

Von Neumann Probes and the Assembly of Remote possibilities

Seven years ago I was thinking about von Neumann probes (click here for background). Here is an excerpt meant as preamble to my recent expedition in hopes of  finding out if this theoretical construct really exists:

VON NEUMANN PROBES: An electric field is a cloud of virtual photons. Energy propagation depends on virtual photons passing between charges --chicken or egg. Photons become real when shaken or stirred. This creates an imbalance, a little violation of energy-conservation law, which is tolerated only briefly if the kick is strong or, if the kick is weak, quite a long time. This is why the energy level of info coming to us from distant sources is always very low. What we learn from it depends on our ability to perceive and reason in new ways.

So I have a problem with von Neumann probes. Despite the wonderful idea of probes that can set up anywhere and reproduce, they still couldn't detect anything outside their original programming. This serves only to compound the unknown of unknown regions. Also, after they take their million years to explore our one little galaxy, it would consume at least that time to complete their reports --and again that long for us to receive them.

Our expansion into distance is unlikely to depend on a big gas-fired gadgets shouting imbecilities from deep space. We need to evolve, to do more with less and weaker, subtler, forms of information. When we see light, we detect massless particles, events that aren't actually things --particles that don't exist in the way we define our own existence. That's got to change before we can explore much beyond our solar system.

Further thoughts 7 years later: Because the probes' survey of even one galaxy would consume at least 1/2 million years of travel and reproduction, they would have to be equipped with debriefing transmitters that exploited some sort of quantum coherence --a process to which the speed of light (and all electromagnetic wavelength) is irrelevant, or they would have to possess sufficient artificial intelligence to process their own data. Consciousness.  Happily, Norma was able to photograph  one such probe, von Neumann's theory is still defensible: 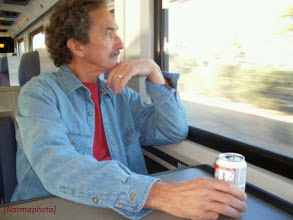 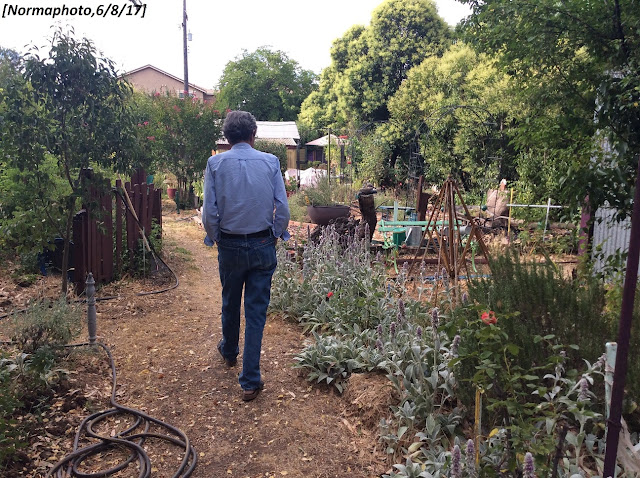 Back still strong --but jeans sagging because worked ass off years ago-- and I still hate these sandals, but this isn't about that. Our specimen is heading in. His progress is halfway between south fence and back door. He is thinking about stuff. Bird stuff.

He is thinking about Bellbirds. Something has been tintinabulating around the yard. Mrs. Specimen calls them Bellbirds. She took a Normaphoto: 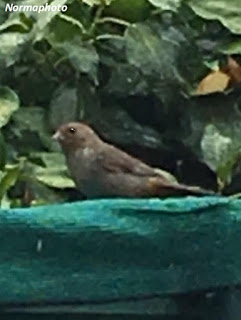 Specimen says Bellbirds are in Australia, not California. Mrs. Specimen asks her friend, Mrs. Otherspecimen, who says, "It's a Cowbird! Terrible creatures that lay eggs in other birds' nests and hatch out fast-growing gluttons that leave the other birds to starve!" Here is a picture of the nest: 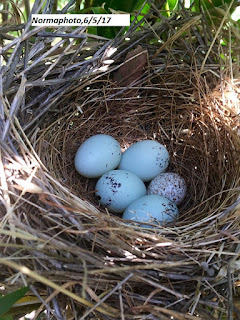 As you can see, one of these eggs is not like the others. Although I really like the bell-like chirp of the strange bird, I'm inclined to believe it's a Cowbird --a feathered family that used to follow bison and leave their young to others. Their calls are similar, but I have not heard of Bellbirds in California.

Two days later, the little egg was gone from the nest. My guess is the owner of the nest pushed it out. I couldn't find it on the ground. Whatever is on the ground and has a shell is defined as food for other creatures. Earnest squirrel has kept his distance. The enigma is unsolved. 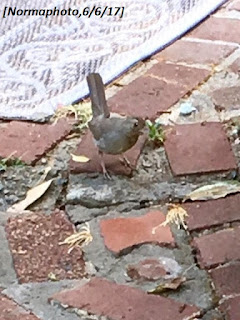 All I know is, this bird, this specimen joined me in my inspection --and I cannot conflate the loss of one specimen's ass with the loss of another's egg.  We all work hard as best we can.  However, I would appreciate any and all suggestions about what sorts of birds are dealt with here.