What IS History Anyway?

Alas, I get political:

Two years ago, I asked, 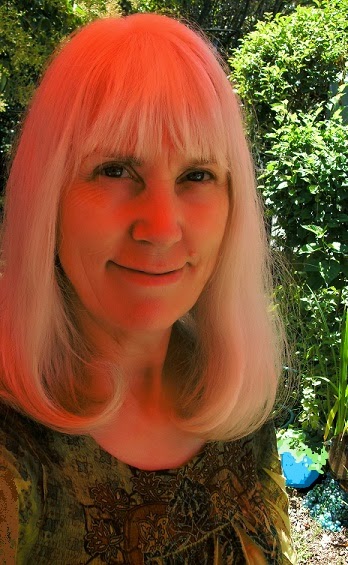 Is this the face of someone who'd paint things bleu for no particular reason?

In 1906, Walther Raster founded the Justrite Manufacturing Company with Frederick Becker. They sold this can: 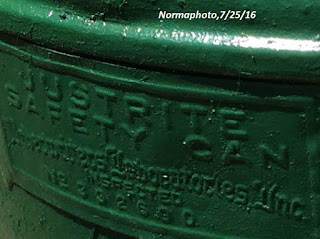 It was rusty and cruddy. It belonged to my grandfather. Strangely, Norma didn't set it out in the garden and paint it bleu (blue).  She painted it green: 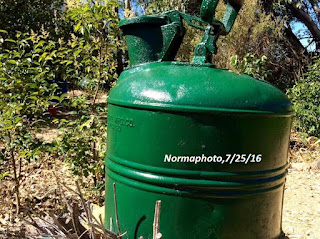 The can is about 100 years old and full of history. It has an ingenious spring-loaded, lever-operated lid, so history can't escape unless you pull the handle back real hard. It is a safety feature. History can be quite flammable.

What is history anyway?

As I answered my history-class teacher 50 years ago, "History is social movements and explosions sometimes, but mostly it's barbwire fences and people just standing around."  He kindly accepted my imbecility and asked some other kid. I forget what the other kid said but it was also true. A discussion ensued. This was a time when Timothy Leary said, "Women who seek to be equal with men lack ambition." (Yes, he was a feminist by then.) and Joan Baez, her mother and sister, Mimi, posed for a poster captioned, "Women say yes to men who say no." I could go on,  but I don't want to and you can't make me, but history was clearly defined. Still is.

OK, it was a strange decade. There were other names I remember: Martin Luther King Jr.; Medgar Evers --whose murderer went free for 30 years-- and, of course it was open season on the Kennedys.

But basically,  history is people. People are measured by experience, yes, and importantly and most certainly, by their capacity for experience. That is character and conscience. I learned a lot from some amazing and courageous people in my formative years, and from those heroes who followed them --young people too-- and I fear only two things: age making me rusty and cruddy, and Norma coming at me with green paint.


Because my Uncle Eyeball developed Rocket Butt  and jetted up on a protracted intergalactic survey, I have lately been compelled to ask another relative for advice, my dear Acerbic Aunt Acid. 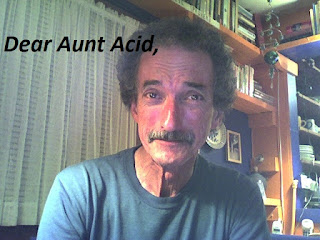 Dear Aunt Acid,
I clicked onto my blog today and noticed something alarming...

Dear "Alarming...",
That's what you get when your ancestors immigrate to The New World instead of a nice settled country like Acerbia, as I did. Yes, I know, we've argued about it before but they wanted a fortune to cross the Atlantic --even more if I was furnished a boat-- so I came to this lovely, vitriolic country and acculturated myself and made a good living with an advice column. Now, "Alarming", who should have a proctologist examine his brain, what is your problem?

Dear Geo.,
I knew it was you, which is why I'm being nice. Shoot.

Dear Aunt Acid,
The GFC Followers list, at the head of my blog, suddenly shows only one line of 20 subscriber icons (and requires key-prompts to show the rest) where it used to show 4 lines and things were simpler. The count is still at 88, but it takes longer to get through them and the dashboard is rearranged in that area too.  It did this by itself. I have visited Google forum to find similar problems and solutions to them but it yields nothing. What's going on?

Dear addled Geo.,
Send a plea out to your subscribers to find out if they see the same thing at your GFC gallery.  The rest is up to you. Now, excuse me, I must go sweep teeth off the dance-hall floor. 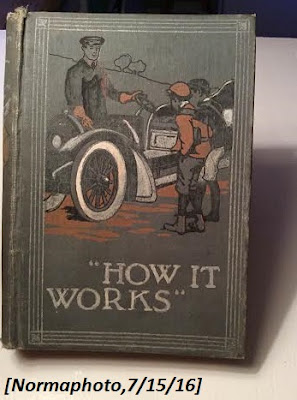 35 kids is more than enough for any family.

The book contains everything mechanical that a kid of any century ought to know.  Here is a diagram of how music is made in a piano.  It is a complex coordinated activity of whippen flanges, cantilevers, dampeners and felted hammers. From it I learned that rubber bands could be stretched from one's front teeth and played pizzicato.  However, the astute autodidact soon found higher notes wanted more stretching than rubber bands could manage. 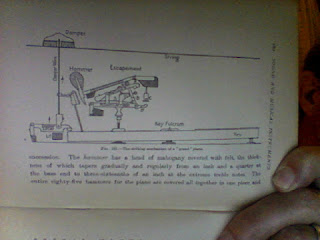 They would snap and whack me in the chops. This, rather like picking up a cat by the wrong end, taught generations of kids something they could learn in no other way. We learned to make music within the limits of our materials, and grant upon ourselves the kindly wish that old misfortunes be reversed.  We were curious, happy children.

We were customarily sent outside after breakfast and called in to supper several years later.  As a result,  most of our activities would necessarily fall in the category of  outdoor pursuits. The book helped there too.  It diagrammed the dynamics of kite ascension. 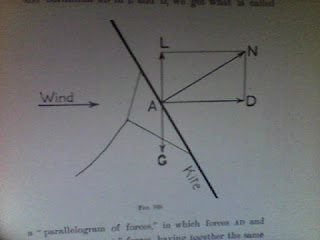 We learned, in the words of another kid (Benjamin Franklin), "a kite flies highest against the wind", and aimed tens of thousands of them eastward.  String being unreliable in those days and kites being constructed of available materials --bamboo, newspaper and snot-- caused a century of the things to snap free and drift aloft to raise the elevation of the high Sierras.

This forced auto makers to add a lower gear to transmissions so people could safely traverse the grades and all us kids were ordered indoors to watch television, which by then was mostly bad horror films --you know, the ones with blood dripping from their titles-- then get up at like a million o'clock in the morning to go to church. There, we sat and debulliated --relieved only by the dream that we might grow up to own cool cars. 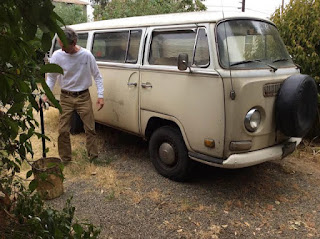 Möbius And Finding One's Self Oneself 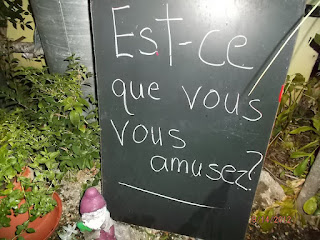 Norma's blackboard invited me to reflect and decide if, after a day of medical tests, I was having fun yet. A simple question if you ignore the virgule --a left-hanging slash mark that is actually a chive. In all languages, including French, grammarians and gardeners can distinguish between virgules and chives because chives cast a shadow and virgules do not . This is elementary punctuation to my generation but is no longer taught and bears repeating. By such details one finds one's self.

The phrase "one’s self" is used in spiritual, philosophical and psychological description. Otherwise, "one’s self" can be replaced with the pronoun "oneself" except in possessive reference to a small mythical being --in which case, it's probably better not to mention "one's elf", especially loudly on a cell phone in public. Why? Because it doesn't really compete with public cell-phone broadcasts like, "Where you at? No, where YOU at? I'm at the checkout line, buying  stuff FOR MY CONTAGIOUS BRAIN-EATING DISEASE!"

Where this leaves one's self in relation to oneself is debatable.

People who shout publicly on cell-phones are the biological equivalent of a geometrical enigma, the Möbius strip. 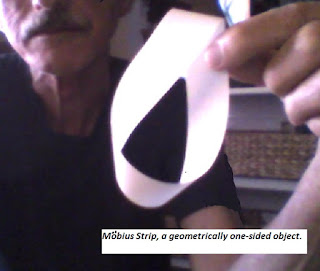 The Möbius strip is a 3-d surface with only one side. It was discovered independently by German mathematicians August Ferdinand Möbius and Johann Benedict Listing in the same year, 1858. This was a great coincidence, diverging only in subsequent disagreement between the two mathematicians over which side had been isolated. Möbius claimed the outside and Listing argued for the inside. They finally agreed it was neither but the model was named after the mathematician with the best left hook (however, Mobius's umlaut was stolen that night and the grammatical case was never solved!).

Cell-phone shouters seem only to have an outside, but their effectiveness in driving the rest of us inside suggests both planes coexist in emotional opposition.

Two-sided people can use cell-phones too. Norma uses hers to converse very quietly with our children, who have grown up and scattered over the world, in the same gentle voice she used to hush them to sleep with when they were little. She does this in the evening while painting things blue. 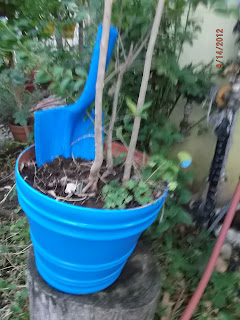 While Norma was murmuring soporific phrases to our offspring, lots of friends were questing off to India to find themselves. They would come back after a year or two, full of strange enthusiasms --meditation, ego-abolition, gravity bathing (ok, I just made up gravity bathing)-- back to find their little ones had found other parents and their spouses reassigned. But they had found themselves in search of themselves --and, to their credit, they found a lot of Indians.

My personal search for myself is as it has always been. The sun sets. I set out. On the way, I notice the elf is not an elf but a purple caret-capped gnome at the foot of Norma's slate. A caret, I should mention, is a pointy grammatic symbol suggesting insertion (caret ^) and should not be sat on by accident. As for myself (this one's self) or whatever I was looking for, I probably forgot and left it in the van. I'll go look. 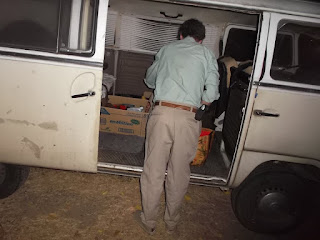 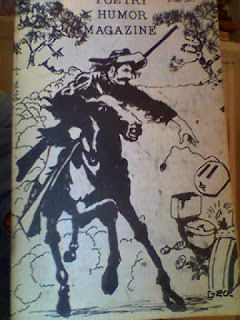 When this country was only 200 years old, I was illustrating small press publications. Above is a cover from the July 1976 number of Poetry Humor Magazine.

40 years ago I could draw a pretty good horse for a one-color run. These were not fancy publications. They served much the same purpose as blogging serves now, except they were paper and had to be subscribed to and sent out by regular post. The issue above was thematized by waste. My rider was a recurring character who, on this cover, is shown heroically tossing a toaster onto a rubbish heap. I named him Buffalo Faustus --a commentitious frontiersman who recycled things in the wild west in exchange for spiritual redemption. He had big adventures. I wrote this for that issue: 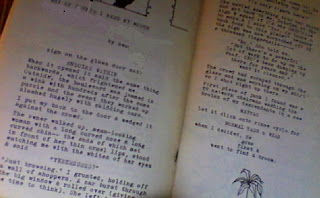 Sign on the glass door said:
INQUIRE WITHIN.
Inside, it said the same thing backwards, which
frightened me.
Outside, the boulevard was jammed in a wink with
hundreds after the same puzzle and the sweat they worked up
Sloshed hugely with skidding cars.

I put my back to the door and held it against the crowd.

Owner walked up --mean-looking woman wth a long curved nose and a long curved
chin, ends of which met in front of her thin cruel lips. She said, "YEEEEESSSSS?"

"Just browsing," I grunted, holding off a wall of shoppers. A car burst through the big window and rolled over. She left to attend to it. Driver came to, spat out some upholstery and asked,

She mumbled something into the wreckage and got back to me, pointed at the sign and asked if I had any inquiries to make.

I said,"Yes, is there a back door to this place?"

This is an abbreviated version of my contribution  to Poetry Humor Magazine but it adequately fixes Buffalo Faustus's position in an increasingly chaotic universe. I have no idea what its spacial-temporal coordinates might be after 40 years of inattention, but imagine they are not so very distant from my own. I do, however, have now --as I had in 1976-- high hopes for our country's resourcefulness and ability to stabilize under duress. I have no doubt Buffalo found the back door to political upheavals of his time and will reappear with inquiries useful to our current remove.

To all, a happy fourth!