Events begin and continue in a sea of meaningful groupings of acausal events. This is called synchronicity by quantum physicists. Let us examine this phenomenon and its neglected attendant, asynchronicity --which nobody knows what it is yet and neither do I because I'm not even done with the topic paragraph. Pretty sure it began Thursday night.

Thursday night, I couldn't connect to the internet. Picked up the landline phone --no dial tone. Went out to the junction box to bypass any house-snafus and got no tone out there either. I called our phone company, Frontier Communications. Frontier is a Scandinavian outfit but I was able to get an American dispatcher. She was in Indiana. I told her my problem and was assured someone would be over in the morning. I opened the front gate at 7 a.m.

He said, "I know." and followed me indoors. He told us he'd found a problem with the relay station down by the bridge and jury-rigged it before coming over --but also found our modem and router outdated and replaced them with a new device with wi-fi built-in. Then told us he didn't work weekends but would return to the relay station Monday to make adjustments. He handed me his card and said "Call me if anything else goes haywire."
He drove off. I went in and asked Norma to photograph Jay's card:

"That much is certain.  I never dreamed Frontier had that kind of pull!

Monday, we drove into San Francisco by this bridge:

We booked our favorite room at The Great Highway Inn. As E.M. Forster would say, it has a "view": 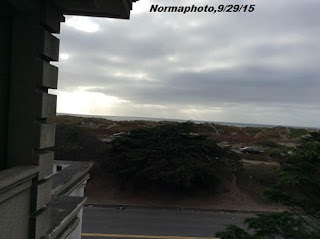 It is also within strolling distance of our son's place, where he and his mother speculated on the activities of helicopters over the area, followed by fire engine sirens. I assisted in these observations whenever my sight-seeing pursuits permitted: 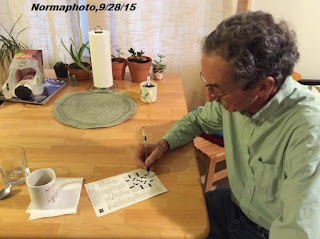 Next morning, Tuesday --today, Norma and he took a hike up to Lands End and saw evidence of recent crisis --a 36-foot sailboat ruining in the surf: 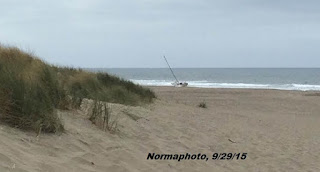 Helicopters, Fire Department, and Rangers managed to rescue both men from the boat, and their dog. Miracles sometimes take a lot of concerted effort. When we drove out of San Francisco, Norma took a photo as we emerged from a tunnel ahead of the Golden Gate. I have added a few stars to make it look like we were en route  to a lovely blue planet. 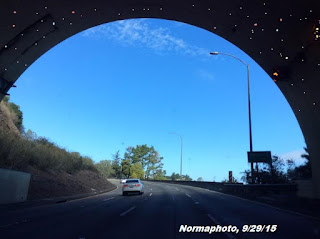 My thoughts were on the internet and whether or not Jay had been able to fix the problem down by the little bridge on our road. Norma thought he would. I was pretty certain. As evidenced by this post appearing at all, it would seem our faith was justified.

I'd like to thank anybody in the congregation for remaining in their pews since Sunday. Your regular pastor will return after dealing with possible boat-theft charges.Until then, go thou and do likewise.


Once again, I looked into the bathroom mirror this morning and found some new kind of idiot. 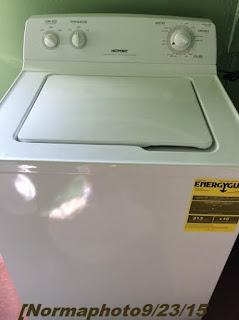 So I proceeded  to our back porch and admired the new washing machine, delivered two days ago. We indulge this craving for new appliances --whether we need them or not-- every 20 years or so. I was understandably surprised when the machine said gangster-like from the corner of its mouth , "You're no idiot, seee? You just can't think of anything to write."

"I could write about you, call you Edward G. Washingmachine and put a cigar in your mouth, right there where that gap is in the corner."

"It would be disrespectful. Robinson was an admirable man. He collected art but always said art collected him. He was extremely talented, spoke seven languages.  He felt every role he assumed professionally was a big responsibility..."

"Oh (how could I?), the kid in the 1950's who had to take an a plane trip back to his family. He boarded the plane and the only seat available was next to Edward G. Robinson, who calmed the kid down, was kind to him and, after the plane landed, waited with the kid until his family showed up to collect him."

"Just one other thing. You don't have to answer..."

"Kid, In two days I've seen enough of your dirty laundry to know you're on the up and up. Ask."

"That last film in '73, Soylent Green, about global warming --You did a death scene. Did you know?"

"Know that I'd do a real one two weeks later? Don't be an idiot. Important thing is you turned out alright. Now go on outside and see what Norma arranged for the equinox. I may not be around any more but I still know what art is. Get!" 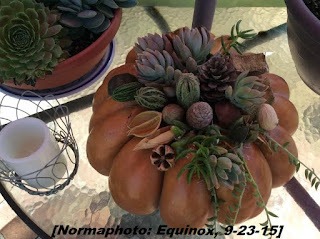 And I too know what art is.

To all, a pleasant autumn. 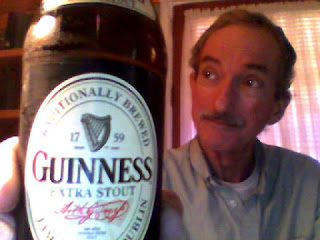 The picture above is in part a tribute to my favorite brew which, according to the label has come from St. James's Gate in Dublin since 1759.This brings us to the clip below, and to the mystery that follows it.
Clip is also about corned beef and cabbage, but this essay will be confined to musical theory, pubs and the act of skipping. Strife flees a jolly polka and polkas involve lots of skipping. This is one from "John Field Suite" --arranged by Hamilton Harty. It may not originally have been composed for Guinness. It is about skipping from pub to pub. Upon opening a second stout, it is obvious the piece is further reducible.

It is just about skipping.

One cannot listen to Harty's "John Field Suite" without wanting to skip. Even those who question the logic of skipping, who have not skipped since childhood, must at least imagine skipping to the music. It contains a message from outside time and space. We all do. One is assembled around them. One is born into the world with eternal truths at one's core. If you play the whole piece, you'll find an accelerating tempo near the end that will cause you to skip around in circles and fall down. This too is an eternal truth. 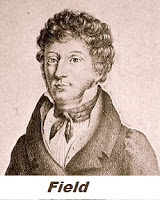 I posted the clip several years back, along with some other cheerful tunes by various artists, but I checked and YouTube now responds with a message: "Sorry, this video no longer exists." Existence can be unreliable, but it's prudent to make sure. I will use still photos. One video involved the Buffalo Philharmonic Orchestra tuning up for 16 seconds --long enough to perceive an enigma. 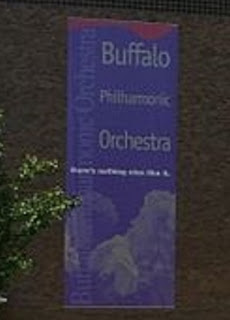 Here is a photo of their home venue in New York, Kleinhans Music Hall. The problem is obvious in it too. A conspicuous absence suggests the orchestra has misrepresented itself.

One dreams of the conductor hiking out to the paddock and herding these talented creatures onto the stage to perform on their instruments. One travels clear to New York, filled with admiration for musical buffaloes, and sadly finds no sign of them, only human musicians . An examination of the photo shows the surrounding grass devoid of hoof-prints.

There is, however, a field --a continuity. Indeed, clues come from within, and should the reader wish to pursue this one further, to unlock the enigmatic importance of  Fields,  I would suggest a study of  Sir Neville Marriner. Fields are so important to him, he has never consented to conduct The Academy Of St. Martin anywhere else.

What Is Summer Anyway?

I like dragonflies, even if one of them is really plastic and I don't know which. This why I don't do self-portraits. I also blame hot weather, which has a strange effect on any enterprise that distracts one from it. 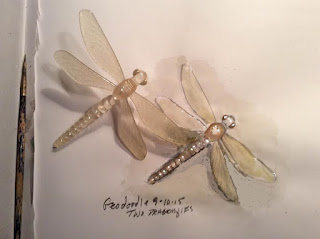 It is September, yet the pumphouse thermometer looks like this: 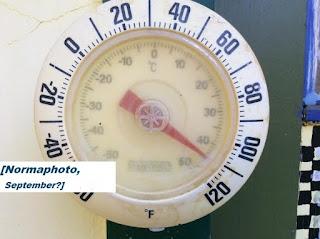 I tapped on it, tried to believe it is in error. After all, weather news predicted only 108F for today. Should I blame meteorologists? Even as my brains evaporate I know I can't expect people who study meteors to reliably predict Earth-weather. So I doodled a dragonfly and stuck it up top because I like dragonflies and they are even more confused by protracted summer than I. What is summer anyway?

I will try to find some answers indoors.

Summer is Normagardenart, which I do like. Here is what she calls, "Mikhail Baryshnibeet": 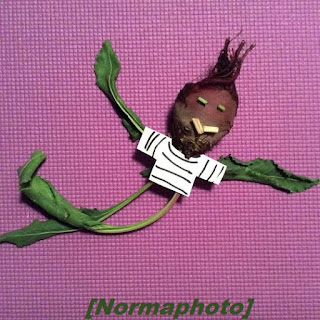 She also set an old jug on a ladder: 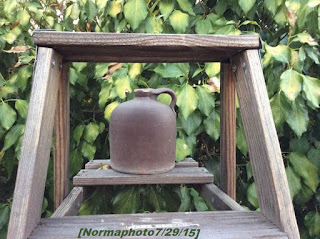 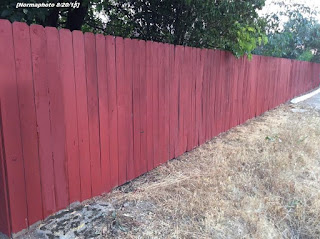 And she Normaphotoed the August sky--some of the clouds are on fire: 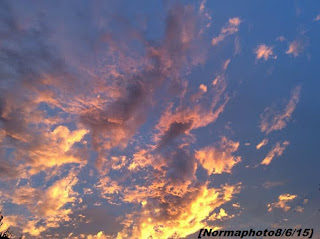 So I guess there are some things to like about summer --especially staying indoors and writing about it. 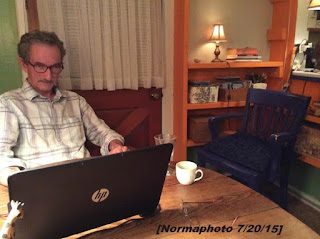 So what is summer anyway? My theory --which meteorologists would doubtless verify if I went and asked them in this heat-- is the Perseid Meteor Shower (every August) impacts the Sun, diverts it and causes it to pass between Earth and the Moon. Sometimes, however, there are so many rocks up there, the whole operation gets stuck until they grind and melt away, which is why it's still 110 degrees in September. This is a sound theory, unencumbered by awkward logic and, as I intimated to Pearl, earlier this evening, after cryotherapy my cranial remains are quite satisfied with it.

The Enigma of Favorite Things

It is September and I don't know what to write. I like this month --some favorite people were born in it-- but the heat is lingering and leaves still cling green to trees. When all sensible topics are exhausted, I usually go straight for the gub'ment --but believe I've done that elsewhere, so I will write about, eh, my socks. Ok, maybe my hat too. And perhaps close with a lyric I heard decades ago that has not lost its novelty. Surely that's enough for a scholarly essay and enough said.

We are emerging from a very hot summer. But yes, we triumph! And I come away from it with something to wear, something that shouts all the pent-up sounds my poor sun-grilled emotions would like to inflict upon this season while my beloved California is still a drought --a drought that is on fire! 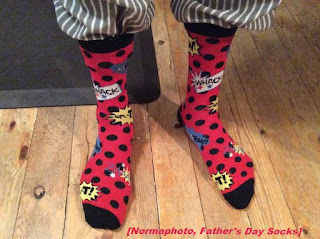 True, they are cartoon noises, not actual violence, but latently --with trousers and shoes-- and overtly with tucked-in pajamabottoms, they give me great pleasure, printed with such  onomonopoetic words as Kapow, Splat, Whack and Zaaap. They are an excellent product of the Sock it to me company, which also makes Cockadodoodledoo socks... 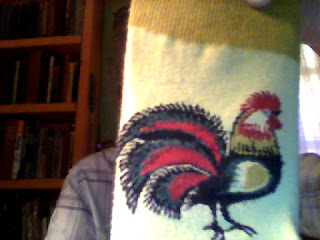 ...and moustache socks (oh gosh have you ever tried to type in this position?)... 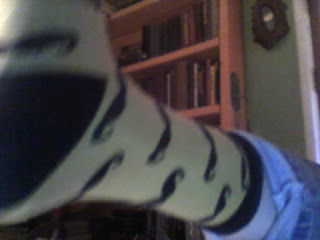 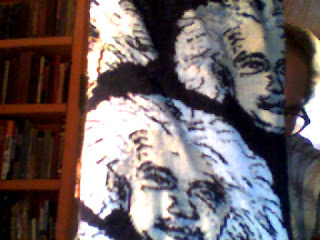 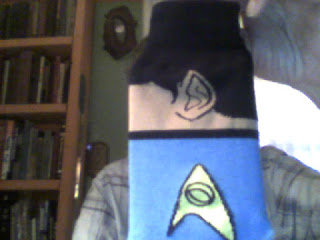 ...they arrive each Fathers Day in June by post from my beautiful, intelligent Daughter who knows me so well. Another favorite thing is a hat from my Son. It is a very classy hat. 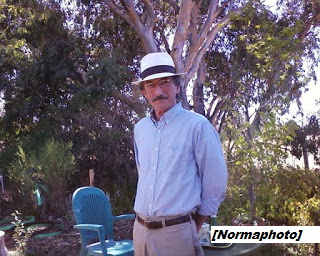 It has got a lot of use lately. Three days ago I visited my doctor about something alarming --recently revealed by my receding hairline. He got out his spray-can of liquid nitrogen and chased me around the room with it. He only caught me twice but it was enough cryotherapy to cause complaints of temperature plunges two buildings away. It left me with a frozen-head thing that panicked children and stampeded cattle. Yes, I live in the wild west --an enterprise full of strange history and outrageous misfortunes-- but a prescient son provided crainial coverage that spared this region further trauma.

As to "Favorite Things", a charming song from The Sound Of Music, I, like Audrey Forbes-Hamilton --a comedic character I enjoyed 35 years ago and can't find anymore-- invariably confuse the lyric with Berthold Brecht's. Threepenny Opera. My attempt: When the shark bites, when the bee stings, when I'm feeling down, I think of a few of my favorite things and Mackey's back in town.

A cooling, pleasant and happy September to all.